The former India wicket-keeper-batsman’s popularity hasn’t dimmed at all. It’s been the same since those days when he modelled for Brylcreem, and was ever strong behind wickets glory to Indian test team and bowlers. Farokh Engineer, who played 46 Tests (66 catches, 16 stumpings and 2,611 runs) between 1961 and 1975 besides 335 first-class games, settled in England and having played for Lancashire for years. Mr. Mehul Kothari, Chairman AIA, briefed everyone of his remembrances from his young age. The meeting was also attended by the full AIA board, Mr. Saxena, Mr. Rohit Babbar, Sanjay Vaid (BCF Chairman).

Engineer at 77, remains exuberant, friendly, charming, inspiring and dedicated to support Cricket anywhere he could. The opportunity was well picked up by the AICC enthusiast during their exercise session. The young cricketers were no short of deliveries of questions on wide range of cricketing aspects. Engineer answered their questions is very amicable and simplest form as to make U13 understand them and probably never forget in their life.

Farokh Engineer captured the attention of the boys for almost an hour. He tested and demonstrated Bowling and wicket keeping skills of many young lads. He gave tips, advise on good practices for pitching, spinning ball by, demonstrating different bowling actions and tips for wicket keeper to hold his eyes on the ball at all times.

Mr. Farokh Engineer got even more attention, when he open his cricket and goodies bag. He showed cricket bats signed by all Indian Cricket Team members and Sharukh Khan. He possessed a framed photo of  Sachin Tendulkar, signed by him off-course and several t-shirts signed by many cricket legends. The display quickly turned to an auction for collecting charity funds of the homeless children in Munbai, India.

As we all know, a good diamond expert knows the price of the high-quality, original and well-crafted stone; Engineers collected 7K plus euros for his charity association, on behalf of the AIA vzw. 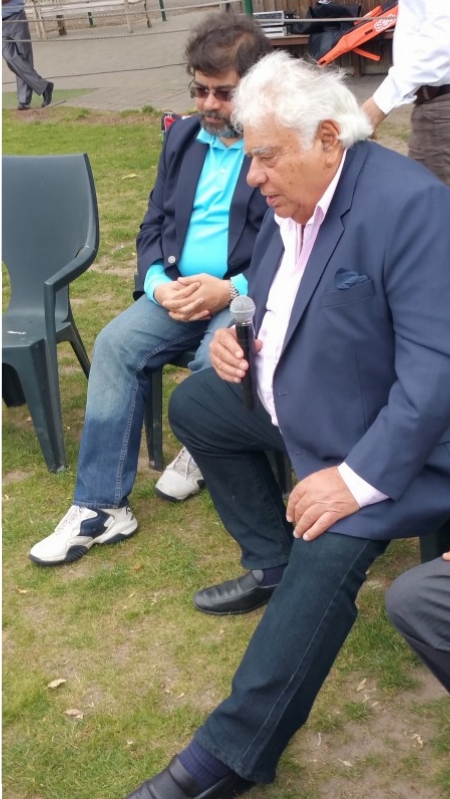